Veldenz Castle, which used to be in the possession of the counts of Veldenz, had been the largest castle along the middle Moselle until it was destroyed by the army of King Louis XIV of France. Its spacious ruins are located on a mountain plateau above the village Thalveldenz, in a side valley off the River Moselle, near Mülheim. The site is partly carved out of a mountain. Although only a few buildings have been reconstructed, the fortifications can still be recognized. 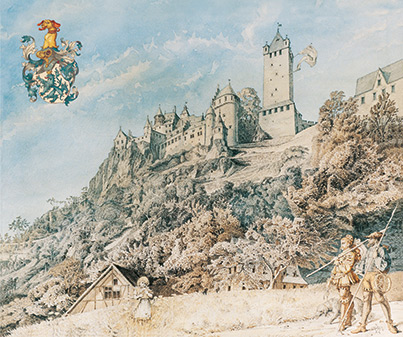 A reconstruction of the undestroyed castle (about 1890).

The castle used to be fief of the bishop of Verdun. This fief also included the advowson of the church of Verdun over its possessions along the river Moselle. According to a chronist’s report, which was written around the year 900, the Merowingian king Childebert II (575–596) presented Bischop Agericus of Verdun with the property in Mülheim "because of the wine". This chronicle praises the achievements of the bishop of Verdun and adds legend to history: One day, the king came to visit Verdun. Unfortunately there was not enough wine to serve the monarch and the bishop felt very embarrassed. God, however, rewarded him for his good deeds and miracously increased the amount of wine. The king was awed. He handed over vineyards in Lorraine and along the River Moselle to the church of Verdun, as it obviously lacked wine. This wine, especially the one from Mülheim, is said to be extremely tasty and was delivered to the church of Verdun over centuries.

A document issued by Emperor Konrad II (1024–1039) gives evidence that Bishop Heimo of Verdun transfered the church of Mülheim to the chapter of Maria Magdalena in Verdun in 1025.

Ancestors of the later counts of Veldenz can be traced back to the 11th century. In 1088 a knight named Emicho became lord over the fief. He probably belonged to the family of the Counts of Nahegau, who are also called "Emichonen". Either Emicho or his son Gerlach built the castle as Gerlach had called himself "Count of Veldenz" since 1130. He therefore may be considered as the founder of the count’s family. The castle itself was mentioned for the first time in 1154: Emperor Frederick Barbarossa confirmed that Bishop Albert I owned Veldenz Castle as well as another estate in Mülheim.

As the family of the Counts of Veldenz split up into several branches, their possessions were devided, too. During the 12th century the Counts of Veldenz got fiefs from the Church of Mainz, of Worms and also rights over the so called "Remigiusland", the area around Kusel, which belonged to the St. Remigius Monastery near Reims.

In those days the Counts of Veldenz were said to be very true. A legend tells us about a knight who went to the Holy Land and gave his finacée a golden ring as a pledge of love. After five years time, as he still had not come back, the girl’s mother suggested to throw the ring away because she wanted her daughter to forget the knight. So she threw the ring into the well – in vain. The next day it turned up again in a bucket. Then she threw the ring into the garden but a climbing plant entwined itself around the girl’s window and returned the ring. As a last attempt the girl’s mother wanted to throw the ring into the fire of the fireplace and struggled hard with her daughter, who wanted to save the ring. At this moment spurs jangled on the staircase: The knight was back and he and his bride lived happily ever after.

The Castle as an Insturment of Power

During the 13th century the Counts of Veldenz tried to make the possessions along the Moselle hereditary property. However, the bishop of Verdun as a feudeal lord refused the fief to Count Gerlach. Archbishop Dietrich II of Trier mediated successfully between the opponents in 1220. Count Gerlach had to accept the bishop of Verdun as feudal lord and guaranteed him free access to the castle. In 1214 Gerlach III had arleady tried to increase his power by erecting a castle: in spite of the protest of the St. Remigius Monastery the count had built Lichtenberg castle near Kusel. Although Emperor Frederick II had (1215–1250) had ordered to destroy the fortifications, Gerlach managed to maintain his interest and to keep this castle. 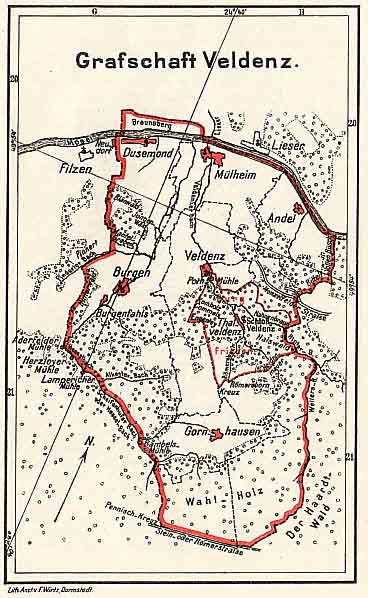 This map shows the district of the earldom along the River Moselle, where the Counts of Veldenz were entitled to the jurisdiction concerning bloodshed as a sign of their sovereignty. Their sovereignty was questioned by the church of Verdun in a long–lasting conflict.

The younger Counts of Veldenz

When the Counts of Veldenz failed to produce male descendants, their property came into the possession of Heinrich von Geroldseck. He was married to Agnes, the daughter of the last Count of Veldenz. Afterwards Heinrich called himself "von Veldenz und Geroldseck” and became progenitor of the younger Counts of Veldenz.

In 1290 the dominican monk Hermann von Veldenz wrote the earliest epos in the Mosellean dialect known so far. The original manuscript was found in 1999 and reports the fate of a brave woman of the House of Vianden: Yolanda von Vianden.

During the 15th century the earldom reached its widest expanse. Towns like Armsheim, Meisenheim, Lauterecken, Kusel, Veldenz and half of the earldom of Sponheim now belonged to the territory. But then again there were no male descendants when Count Friedrich III died in 1444. His possessions fell to his daughter Anna. She was married to Pfalzgraf Stephan von Zweibrücken, a son of King Ruprecht von der Pfalz and member of the influential Wittelsbach family. Anna and Stephan founded the branch of Pfalz-Zweibrücken. As the Wittelsbachs were much more powerful than the Counts of Veldenz, the bishop of Verdun feared to lose his claims to the earldom.

On becoming ruler Anna’s son, Ludwig der Schwarze (the Black), inherited the Earldom of Veldenz as well as a part of the Earldom of Sponheim. Both territories now belonged to the newly created Duchy of Pfalz–Zweibrücken. Ludwig, however, lost great parts of his land during the permanent war with the Kurpfalz (Heidelberg).

The family of Pfalz-Zweibrücken soon divided into several branches. One of them became the branch of Veldenz. Duke Wolfgang of Pfalz-Zweibrücken (1526–1596), an ardent advocate of the reformation, managed to acquire those possessions and rights which originally belonged to the Magdalenenstift of Verdun. In 1543 he handed over parts of the former earldom of Veldenz to his Uncle Ruprecht. The districts (Amt) of Veldenz and Lauterecken now formed the Duchy of Pfalz-Veldenz, which even had its own currency, the "Veldenzer Thaler”.

Pfalzgraf Georg Johannes I (1543–1592) was an intelligent man, but also a dreamer and out of touch with life. He married rich Princess Anna Maria Wasa, daughter of the Swedish king.

With a short interruption during the 30-years-war, Veldenz castle remained, in the possession of the house of Pfalz-Veldenz until it was captured by the army of King Louis XIV.

It is said that this capture was easy to carry out: On 16th July 1680 apparently only four poorly armed men guarded the castle. They had little chance to defend themselves against 13 dragoons. After his victory the French king demanded that the current Count Leopold Ludwig recognized him as his souvereign, because Louis XIV had inherited the rights of the church of Verdun in 1648, at the end of the 30 years war. Leopold Ludwig refused at first but then he had to give in after his depocition on 9th August 1681. This, however, did not prevent the French from burning the castle in the same year. Leopold Ludwig, the last Pfalzgraf of Veldenz, died as a poor man in Strasbourg in 1694. He had outlived all his sons.

The Kurpfalz era and the sale of the ruins in 1807

After the French had left, Kurfürst Johann Wilhelm von der Pfalz successfully took over the duchy, despite a longlasting conflict with the line of Pfalz-Zweibrücken. In 1733 it was for sure: Pfalz-Veldenz and the castle were part of Kurpfalz. By the end of the 18th century French troops conquered Veldenz once more. In 1807 the remains of the former castle were sold to a private owner, who used it as a quarry.

Later, however, the proprietors tried to maintain the fortifcation and started to rebuild some of its parts. Today the castle belongs to Haufs-Brusberg family. The knights’ hall has been renovated and decorated in an authentic way. The new owner arranges historical guided tours. A medieval catapult has been reconstructed and presented to the public. It is on show in the castle.